Across America it seems the attack on teachers that began in the 1980s to lay blame first for lagging economy and then for failing students is in high gear. Politicians not wanting to face up to the failures of our economic system to spread fairness and opportunity decided to standardize our schools and turn every kid into a widget demanding the schools produce the worker units we need. The Bush experiment, called No Child Left Behind seems largely to have failed to make a difference other than labeling a growing number of public schools failing schools; or as Diane Ravitch outlines in her new book, The Death and Life of the Great American School System: How Testing and Choice Are Undermining Education.  The title says it all.

In an article in Education Week, “Corporate Education Reform: A moment of national insanity” she outlines the events of the last month: Detroit closing half the city’s public schools and creating classes of 60 students. The school board of Providence RI voted to fire all of 1200 teachers to give them maximum flexibility. In Idaho, the state superintendent has proposed a plan to layoff 770 teachers over five years. Wisconsin and Maine are voting to take pensions and salary from teachers as well as collective bargaining to offer more to the already hoarding super rich in their states. She sees it as a clear attack on organized teachers. Diane Ravitch shares a blog with Deborah Meier, an education reformer and author in the Boston area, who in a recent blog adds this: Re . Madison : Who can resist this argument? Only five states do not currently allow collective bargaining for educators. (Those states and their SAT / ACT rankings are as follows : South Carolina: 50, North Carolina: 49, Georgia: 48, Texas: 47, Virginia: 44.) Many states with strong unions have the best performing schools.

Across the country the corporate-financed attack film “Waiting for Superman” is backing “race to the top” and the “Blame the teacher movement.” It is a wonder that anyone can be found who is willing to teach in American schools. I became a teacher 30 some years ago because I believed it was one of the few honorable professions one could pursue — What could be more important than helping prepare young minds for the future? But to believe Scott Walker and other Republicans you would think teachers are ruining the country.

According to World Education Rankings, Finland’s education system is in the top three. Why? Because they honor teachers – revere them. They want them to have Masters degrees, but they give them autonomy 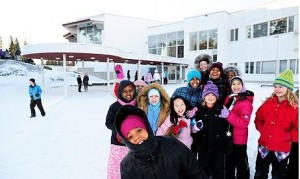 and trust them to teach with the best interests of the students in mind. Finish students do really well on tests, even when many don’t learn to read until age 7. I guess you could say we get the education system we deserve. It is time to talk about how to make teaching a better job and when we do that I think you would see many more students succeed. But we also need to make sure their parents have decent jobs and decent homes. We can’t ignore the ravages of our unfair economic system and expect things to get better. Let’s begin our reform by making sure students have a good home to return too and offer those who are disadvantaged along with their parents early training and help.

One thought on “Attack on Teachers”