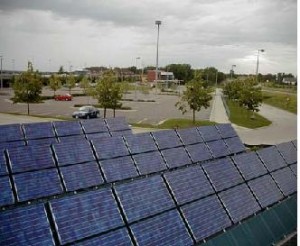 The Omnibus Energy Bill passed the House last Tuesday. If HF956 becomes law, it would set Minnesota’s first solar energy generation requirement for the state’s utilities at 4 percent by 2025. Renewable energy production for the state would need to be 40 percent by 2030.

The bill as it’s written now, would allow for private citizens to invest in the installation of a solar voltaic device and be ensured that there would be a means to sell unused electricity. If private businesses and homes generate enough solar energy to sell to the utilities on the electrical grid, the bill requires utilities to pay a rate adusted annually by the energy commission.

For futher reading, the full bill can be found at the Legislature’s website. Minnesota’s Department of Commerce has information about the current solar rebate program. .

Movement on the national front is evidenced by the Huffington Post’s article on Renewable Energy Standards in other states. An April 2013 post on the Clean Energy Authority blog describes proposed national legislation making financing solar energy projects similar to financing oil projects , and a number of national news organizations covered Echotech Institute’s announcement that there is tremendous growth in the clean energy jobs sector.