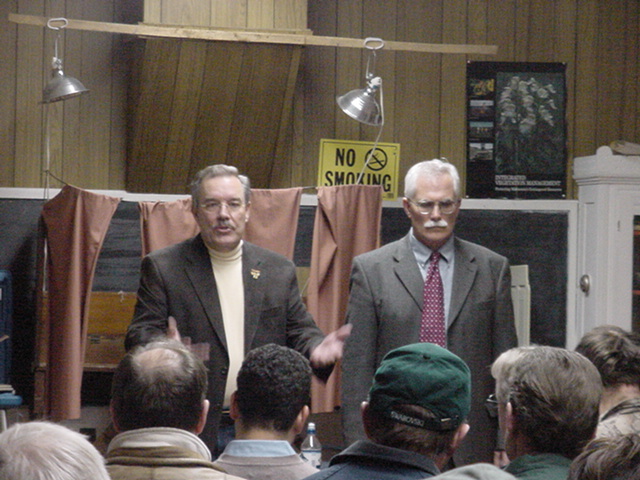 Much of the discussion was on CREP proposals under consideration, the voluntary nature of participation and how types of programs are allocated. A rundown of land in the CREP program is here.

Apparently there was also a lot of talk about water quality and how waters can be cleaned up. The cost of the Total Maximim Daily Load (TMDL) program is expected to be $75-85 million dollars and it has yet to be funded. The results for Rice County are on this map Cox, Ozment and Hackbarth talked as if this program would help our water quality, but the problem with it is that it only deals with problems after they occur, it is focused on identification and clean up of programs. While that’s good, the clean up is done on the backs of the tax payers who are shouldering too much of the burdens today. Clean up, as suggested by one Lonsdale resident, should be at the expense of the polluters, but none of the Representatives advocated for identification of the polluters and assessment of clean up cost. Non-point pollution was hard to categorize, but now at least the type of contamination is identifiable, which limits the universe of polluters significantly. And as with any type of problem, prevention is always less expensive than a clean up effort. One constituent was concerned about manure application over drain tiles, which provides a direct link into our waters, but the Representatives did not offer any preventative suggestions, and Rep. Cox’ suggestion was that the TMDL program should be used because it would identify the polluted water, but again, that’s after the fact! And Rep. Cox stated clearly that he was not in favor of assessing infrastructure improvements on the party causing the need – the result is that it is shouldered by the taxpayer. Is that fair?

Information on TMDL was posted on this blog on August 23, 2003.
Nearly all of Rice County’s lakes are identified as polluted, only 3 are “good” and the rest are “poor.” For some specifics on the Cannon River, scroll down — the Rice County monitoring results are on the second page.

As noted on this blog before, water monitoring is something you can do.