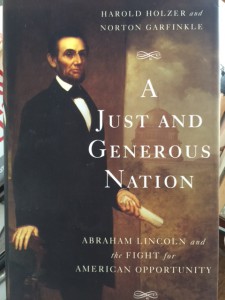 Earlier this month we celebrated Lincoln’s birthday, the President who many consider our greatest President. Ralph Waldo Emerson once called Abraham Lincoln, ‘our first middle class President’ because he advocated a government that helped open a path to prosperity for all, and he advocated a government for, by and of the people. The notion of the “American Dream” is attributed to Alexis de Tocqueville, however, in a new book by Lincoln scholar, Harold Holzer and economist Norton Garfinkle (A Just and Generous Nation) establishes Lincoln’s policy initiatives were all about shaping the ‘Dream.’ There is no clear sign that Lincoln, the subject of their book, the 16th President, ever read Tocqueville. He did however live the experience of rising from obscure poverty to the most powerful position in the land.
“Lincoln understood,” the authors argue, “that the future of American democracy depends above all on a thriving middle class.” Without a government committed to creating a balanced economy we will have neither political nor economic success. Lincoln believed in economic fairness and seemed to understand that middle and working class spending is the primary engine of economic activity in our country. To this end he worked to implement policies that are fair to all citizens not just a few. Lincoln believed that common aspirations espoused in a ‘dream’ of opportunity would unite us and help mute the differences in wealth, culture, race and ethnicity knitting together a society with common interest. Without government investment that would support the interests of every one these divisions tear our democracy apart.
Lincoln advocated for a community, a nation bound together by shared values. Without that our society falls to the influence of those with the greatest wealth and our society reflects an hourglass with some folks at the top, a small number if any in the middle, and a mass of people at the bottom, poor and struggling. Lincoln knew it would be difficult to sustain a democratic society with out a belief in a common destiny.
He more than any other President before him understood our democracy depended on positive government action to build and maintain a successful middle class society. He understood the workaday realities of life in our country. As the author’s say, “In Lincoln’s mind, the opportunity ‘to improve one’s condition’ was an essential feature of the Declaration of Independence’s assertion that human beings have unalienable rights to ‘life, liberty and the pursuit of happiness.’”
In response to Lincoln’s efforts to help us see a common moral thread in our shared existence came Andrew Carnegie’s “Gospel of Wealth” and it’s message of supply side economics and trickle down economics, the idea that if government gave favor to the wealthy we would all eventually benefit from the good that was done as it trickled down to us; The idea that feeding oats to the horse would also feed the sparrows, as the undigested oats in the horse dung could be food for them.
Almost every President since Lincoln has tried to grasp his mantle and claim that they were bringing forth his vision of a Just and Generous Nation, but some fell far short of his idea of a common dream. Ronald Reagan even borrowed made up quotes to claim Lincoln embraced the Gospel of Wealth.
This tradition, the Lincoln tradition of a middle class society is what I have tried to capture in my recently published book, We All Do Better. I hope you will give it a look. These are very important times and we face the absolute loss of Lincoln’s dream of nation with a common destiny if we don’t reinvest in the things that truly matter in our society and create a balanced economy that can work for everyone.