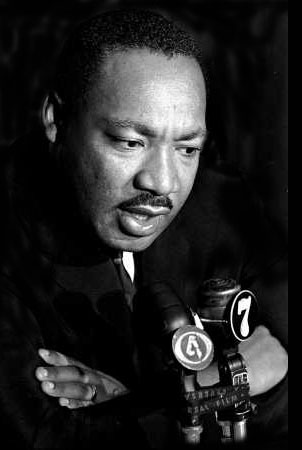 “I have the audacity to believe that people everywhere can have three meals a day for their tired bodies, education and culture for their spirits. I believe that what self-centered men have torn down, men other-centered can build up. I still believe that one day mankind will bow before the alters of God and be crowned triumphant over war and bloodshed, and non-violent redemptive goodwill will proclaim the rule of the land ‘and the lion and the lamb shall lie down together and every man shall sit under his own vine and fig tree and none shall be afraid.’ I still believe that we shall overcome.”
Martin Luther King, Jr.

When I had just turned sixteen my father was sick and dying at 43, that was 1968. When spring came my father would dress warmly, sit on the front porch and sing hymns. He took great solace at that time from Martin Luther King’s sermons. In particular one King gave shortly before his murder about not making it to the mountain top. My father said, seeing Marin Luther King Jr. face death so bravely helped him face death with courage too. My father passed away one week after Martin Luther King that year, in 1968 it was the Friday before Easter.

“Now, in order to answer the question, ‘Where do we go from here?’ which is our theme, we must first honestly recognize where we are now. When the Constitution was written, a strange formula to determine taxes and representation declared that the Negro was sixty percent of a person. Today another curious formula seems to declare he is fifty percent of a person. Of the good things in life, the Negro has approximately one half those of whites. Of the bad things of life, he has twice those of whites. Thus, half of all Negroes live in substandard housing. And Negroes have half the income of whites. When we turn to the negative experiences of life, the Negro has a double share: There are twice as many unemployed; the rate of infant mortality among Negroes is double that of whites; and there are twice as many Negroes dying in Vietnam as whites in proportion to their size in the population.

“In other spheres, the figures are equally alarming. In elementary schools, Negroes lag one to three years behind whites, and their segregated schools receive substantially less money per student than the white schools. One-twentieth as many Negroes as whites attend college. Of employed Negroes, seventy-five percent hold menial jobs. This is where we are.

“Where do we go from here? First, we must massively assert our dignity and worth. We must stand up amid a system that still oppresses us and develop an unassailable and majestic sense of values. We must no longer be ashamed of being black. The job of arousing manhood within a people that have been taught for so many centuries that they are nobody is not easy.

“The fact is that the work which improves the condition of mankind, the work which extends knowledge and increases power and enriches literature and elevates thought, is not done to secure a living. It is not the work of slaves driven to their tasks either by the, that of a taskmaster or by animal necessities. It is the work of men who somehow find a form of work that brings a security for its own sake and a state of society where want is abolished.

“Work of this sort could be enormously increased, and we are likely to find that the problem of housing, education, instead of preceding the elimination of poverty, will themselves be affected if poverty is first abolished. The poor, transformed into purchasers, will do a great deal on their own to alter housing decay. Negroes, who have a double disability, will have a greater effect on discrimination when they have the additional weapon of cash to use in their struggle.

“Beyond these advantages, a host of positive psychological changes inevitably will result from widespread economic security. The dignity of the individual will flourish when the decisions concerning his life are in his own hands, when he has the assurance that his income is stable and certain, and when he knows that he has the means to seek self-improvement. Personal conflicts between husband, wife, and children will diminish when the unjust measurement of human worth on a scale of dollars is eliminated.

“Now, let me rush on to say we must reaffirm our commitment to nonviolence. And I want to stress this. The futility of violence in the struggle for racial justice has been tragically etched in all the recent Negro riots. Now, yesterday, I tried to analyze the riots and deal with the causes for them. Today I want to give the other side. There is something painfully sad about a riot. One sees screaming youngsters and angry adults fighting hopelessly and aimlessly against impossible odds. And deep down within them, you perceive a desire for self-destruction, a kind of suicidal longing.

“And when one tries to pin down advocates of violence as to what acts would be effective, the answers are blatantly illogical. Sometimes they talk of overthrowing racist state and local governments and they talk about guerrilla warfare. They fail to see that no internal revolution has ever succeeded in overthrowing a government by violence unless the government had already lost the allegiance and effective control of its armed forces. Anyone in his right mind knows that this will not happen in the United States.

“This is no time for romantic illusions and empty philosophical debates about freedom. This is a time for action. What is needed is a strategy for change, a tactical program that will bring the Negro into the mainstream of American life as quickly as possible. So far, this has only been offered by the nonviolent movement. Without recognizing this we will end up with solutions that don’t solve, answers that don’t answer, and explanations that don’t explain.

“And so I say to you today that I still stand by nonviolence. And I am still convinced , and I’m still convinced that it is the most potent weapon available to the Negro in his struggle for justice in this country.

“And so I say to you today, my friends, that you may be able to speak with the tongues of men and angels; you may have the eloquence of articulate speech; but if you have not love, it means nothing. Yes, you may have the gift of prophecy; you may have the gift of scientific prediction and understand the behavior of molecules; you may break into the storehouse of nature and bring forth many new insights; yes, you may ascend to the heights of academic achievement so that you have all knowledge ; and you may boast of your great institutions of learning and the boundless extent of your degrees; but if you have not love, all of these mean absolutely nothing. You may even give your goods to feed the poor ; you may bestow great gifts to charity; and you may tower high in philanthropy; but if you have not love, your charity means nothing. You may even give your body to be burned and die the death of a martyr, and your spilt blood may be a symbol of honor for generations yet unborn, and thousands may praise you as one of history’s greatest heroes; but if you have not love, your blood was spilt in vain. What I’m trying to get you to see this morning is that a man may be self-centered in his self-denial and self-righteous in his self-sacrifice. His generosity may feed his ego, and his piety may feed his pride. So without love, benevolence becomes egotism, and martyrdom becomes spiritual pride.

“What I’m saying to you this morning is communism forgets that life is individual. Capitalism forgets that life is social. And the kingdom of brotherhood is found neither in the thesis of communism nor the antithesis of capitalism, but in a higher synthesis. It is found in a higher synthesis that combines the truths of both. Now, when I say questioning the whole society, it means ultimately coming to see that the problem of racism, the problem of economic exploitation, and the problem of war are all tied together. These are the triple evils that are interrelated.

“In other words, ‘Your whole structure must be changed.’ A nation that will keep people in slavery for 244 years will ‘thingify’ them and make them things. And therefore, they will exploit them and poor people generally economically. And a nation that will exploit economically will have to have foreign investments and everything else, and it will have to use its military might to protect them. All of these problems are tied together.

“And I must confess, my friends, that the road ahead will not always be smooth. There will still be rocky places of frustration and meandering points of bewilderment. There will be inevitable setbacks here and there. And there will be those moments when the buoyancy of hope will be transformed into the fatigue of despair. Our dreams will sometimes be shattered and our ethereal hopes blasted. We may again, with tear-drenched eyes, have to stand before the bier of some courageous civil rights worker whose life will be snuffed out by the dastardly acts of bloodthirsty mobs. But difficult and painful as it is , we must walk on in the days ahead with an audacious faith in the future. And as we continue our charted course, we may gain consolation from the words so nobly left by that great black bard, who was also a great freedom fighter of yesterday, James Weldon Johnson :

Stony the road we trod,
Bitter the chastening rod
Felt in the days
When hope unborn had died.
Yet with a steady beat,
Have not our weary feet
Come to the place
For which our fathers sighed?
We have come over a way
That with tears has been watered.
We have come treading our paths
Through the blood of the slaughtered.
Out from the gloomy past,
Till now we stand at last
Where the bright gleam
Of our bright star is cast.

“Let this affirmation be our ringing cry. It will give us the courage to face the uncertainties of the future. It will give our tired feet new strength as we continue our forward stride toward the city of freedom. When our days become dreary with low-hovering clouds of despair, and when our nights become darker than a thousand midnights , let us remember that there is a creative force in this universe working to pull down the gigantic mountains of evil, a power that is able to make a way out of no way and transform dark yesterdays into bright tomorrows.

“Let us realize that the arc of the moral universe is long, but it bends toward justice. Let us realize that William Cullen Bryant is right: ‘Truth, crushed to earth, will rise again.’ “(Excerpts from the “Where do we go from here?” speech. To read the entire speech click here.)