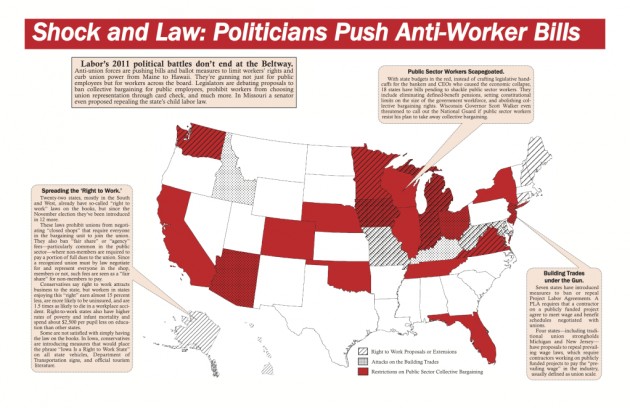 In a blog post on the Levins Publishing Website by Andy Timming and Richard Levins they try to help us understand what this policy is about:

What, exactly, is Right to Work? One thing for certain: it is NOT what it sounds like. The name “right to work” is a clever scam to mislead you into supporting it. If it were called “Minority Rule,” which is what it really is, you would think twice before supporting it, wouldn’t you?

In spite of its misleading name, Right to Work does NOT grant anyone a right to work. You already have a right to work in the United States if you are a legal adult citizen or if the government has granted you the necessary papers to be legally employed. Right to Work legislation has nothing to do with that.

So what is Right to Work? It’s a cleverly disguised special exemption to the constitutional principle of majority rule. With Right to Work the minority rules.

The Minnesota Legislature has introduced several bills to put measures on the 2012 ballot that if passed would be added to our State Constitution.  One of those measures introduced by Sen. David Thompson called “Right to Work.”  It is a measure that several state legislatures have introduced across the country and like the other potential amendments to the constitution is high on the list of the American Legislative Exchange Council (ALEC), an ultra conservative think tank promoting the interests of large corporations.

“Right to Work” might sound good but just like the “Clear Skies” initiative it is very misleading.

Instead of creating a better work environment according to the EPI:

Rigorous studies—using regression analysis to home in on the effect of RTW laws— show that RTW laws:

• reduce wages by $1,500 a year, for both union and nonunion workers, after accounting for different costs of living in the states (Gould and Shierholz 2011)

• lower the likelihood that employees get healthcare or pensions through their jobs—again, for both union and nonunion employees (Gould and Shierholz 2011)

• have no impact whatsoever on job growth (Lafer and Allegretto 2011)

and reporting on the law passed in Oklahoma:

The facts—which come straight from the state and federal government and are now uncontested by any party, are:

• In the 10 years since the law was passed, the number of new companies coming into the state has decreased by one-third (Oklahoma Department of Commerce 2011). Indeed, the same two OCPA staff analysts who authored the most recent RTW study—Moody and Warcholik—also published a 2010 article showing that Oklahoma has suffered a net out-migration of jobs to other states.

• In the 10 years since Oklahoma adopted its right-to- work law, the number of manufacturing jobs in the state has fallen by one-third (U.S. Bureau of Labor Statistics 2011).

Contrary to the claims of ALEC “Right to Work” laws are designed to create a work environment similar to what corporations might find in third world countries.  It is possible that jobs could be created but they would be jobs with low wages and very limited benefits.  Ultimately this would be bad for everyone, because it would mean that more Americans would fall in to the ranks of the working poor.  They would be able to afford less and less and overall demand for goods and services would fall and our economy continue a downward spiral as more businesses fail and ultimately more jobs are lost.

Here’s an example from the Timming Levins blog piece:

Here’s a Dumb Idea We Made Up

Imagine a “Right to Safety” law. Here’s how it would work. Suppose the citizens of a community wanted to invest more money in their police and fire departments. They vote on a local property tax increase to raise the money and the majority votes YES. Normally, everyone would pay the additional tax and everyone would benefit from the investment in public safety.

The Right to Safety law would change things in two important ways: (1) those who voted against the tax would not have to pay it, and (2) the improved police and fire departments would have to provide the same benefits to everyone in the community whether or not they helped pay for those benefits.

The hypothetical Right to Safety law seems like a dumb idea, right? Right to Safety does just the opposite of what it says: it does not provide a right to safety, but it does make it harder for communities to act together for public safety programs. In short, it undermines the will of the majority. The more you think about it, the more it seems like Right to Safety was designed by people who opposed public safety, not those who favored it.

“In our glorious fight for civil rights, we must guard against being fooled by

false slogans, such as ‘right to work.’  It is a law to rob us of our civil rights and job rights.  Its purpose is to destroy labor unions and the freedom of collective bargaining by which unions have improved wages and working conditions of everyone…

Wherever these laws have been passed, wages are lower, job opportunities are fewer and there are no civil rights. We do not intend to let them do this to us. We demand this fraud be stopped. Our weapon is our vote.”    ~Dr. Martin Luther King, Jr.speaking about so-called Right-to-Work laws in 1961.

“Right to Work” is a bad idea.  It should be stopped in the legislature but if we are unable to convince legislators to vote it down, we must defeat it at the polls. Join me in getting the word out.