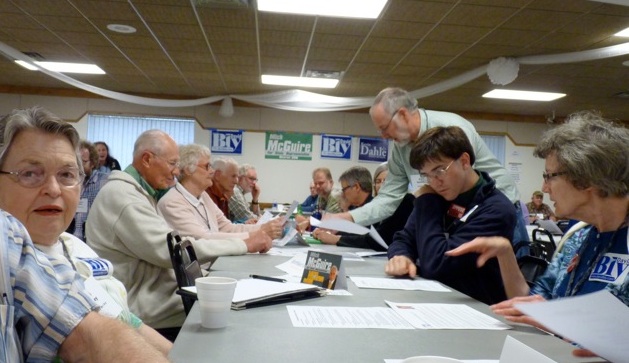 Tuesday evening, May 1st, I was again endorsed by my local DFL endorsing convention. DFLHD 20B, to run for the Minnesota House.  My challenger was Mick McGuire who ran

against Glen Grunhagen in 2010, but was redistricted into the same district.  Mick was a good challenger and made me work harder. As is usually the case the candidate who can muster the most delegates to attend the convention is the one who prevails.

To start us off the Veterans present were called forward to lead us in the pledge:

After the convention unanimously endorsed Kevin Dahle for the Senate seat and Ryan Wolf for the 20A House seat they moved to my endorsement. I was blessed to have 67 delegates turn out on my behalf even thought the convention was in Montgomery and the weather reports were threatening.  I sincerely want to thank all those delegates who were there for me.  I also want to thank Mick for running good and vigorous campaign against me.  I wish things had been different and we could both be running for a seat in the house.

I had five speakers on my behalf who seconded my nomination and all gave strong speeches.

Among them were Barbara Helling, one of my Ed. Psych. Professors at St. Olaf, and Cliff Martin, a Northfield student and National delegate to Dem. Convention Both pictured here. We had only ten minutes total to make our case and I wouldn’t have wanted to cut anything they said but that left me with less time to give my speech, so ended up having to cut it down on the fly.   I only gave about half the speech I wanted to.  So here it is uncut, hope you enjoy it:

Thank you all for being here on the first day of May to take this important step in taking back the Minnesota House. It is a pleasure to be here with you.

I want to thank all those who spoke on my behalf and thank them for their kind words.

On this warm spring day I am reminded of my father who passed away 44 years ago.  He was the man I have admired most in my life.  A day does not go by that I do not think of him. I do not mean to disregard my mother who some of you know as she also influenced me.  But my father was remarkable.

He was small of stature but had a huge heart. He was a scoutmaster in Northfield and occasionally one of his former scouts will stop me on the street and tell me how much he meant to him.  I owe to my father a respect for nature and the environment and a true sense of the value of relationships.

I also owe to him a foundation of wisdom shaped by suffering.  My father was sick most of his life but greeted every day with a smile.

To this day I remember some of the things he told me.  They weren’t original ideas but the way he lived them, and explained them to me continues to make sense and inspire me. Sometimes I wonder if our world has completely turned upside down since his death.

“You get what you pay for.” Was something he said to me.  He was suspicious of trying to create anything let alone a society or an economy on the cheap.  He would be surprised that we now believe the highest virtue is the cheapest price.

“If you own something you must care for it no one else will.”  That goes for the planet as well as your home, your community and your state

“Faith can guide you but it shouldn’t blind you to the needs or beliefs of others.”

“Comfort the afflicted” and it seems we do far too little of that.

“If you believe in something put your best work into it, it will not happen with out your considered effort.”

“Treasure those who walk this life with you everyone has something to offer.”  And he meant everyone, something he reminded me of when we would visit residents at the Faribault State institutions.

“Service to others is a high calling and is best done for the joy of doing it.”

And finally, “If you assume the worst of people that is what you get. Instead look for the best in each person and encourage it.”

These are some of the words that have guided me in my life, in my teaching and in my service in the legislature.  For me politics is a higher calling – as it is service to others.

You have entrusted me with this service several times in the past I hope I have earned your trust and I hope you will stand with me as we fight to take back our legislature to create jobs, protect our environment and build an economy that works for everyone.