I had to be in San Francisco for a family wedding and was unfortunately unable to attend the bow tie celebration for Bob Jacobsen and family. I wish I could have been there to honor a great person and family who have done a good deal for Northfield. I know closing the store had to be a difficult decision for all of them — ‘the store with a heart’ was a cornerstone of Northfield’s business and community life. 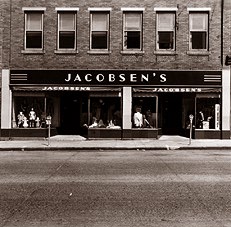 Bob and his family did much to make Northfield a better place not only through their store but through the many things the family has done for others (through church, school, city involvement,etc) it becomes clear the store was the means that brought them here and made it possible for Northfield to be home to ‘Jacobsens’. We have a much richer heritage because of it. I hope others realize that it is not only the wonderful store they gave us but all of them as well.

I have many memories of discovering that ‘Jacobsens’ was the only place I could find many specialty items much bigger stores refuse to carry. But I also remember talking with Bob about several of my students he had taken notice of. He would want to know how they were doing, wondering if they were going to make it. He also wanted to know what I thought about this community decision or that one and in so doing fostering an interest as much as sharing one.

Here is how the event turned out (from the desk of KARoL ROVErland, my highly paid campaign consultant):

It’s the end of Jacobsen’s, “the store with a heart”, which closed its doors on July 24, except for two days this week of “Extra Innings” where proceeds of sales will go to local charities, including the Community Action Center, The Key, and Neighborhood Night Out.

We had an evening of many stories, yet I didn’t rat on my former landlord who wouldn’t allow cats but had a strange definition of “fish” to which Maggie Lee will attest. Rollie and Shar will take a much deserved month in Europe, probably timed around a Springsteen tour, and Bob and Elaine will hone their bridge skills and learn how to be retired — as Bob says, loosely paraphrased, “There’s a time to work a lot, and there comes a time when it’s right to stop.”

But where will we go to catch up on the workings of city government, debate economic theory, review lobbying ideas, or for that matter, meet politicians and activists who make the world a better place? Who else will stock those wild Wellstone plaid shirts? What is Northfield without its nerve center? It was a “good, good, good, good mourning,” sad but right.

Kudos to Rollie and Shar for doing such a good job of wrapping up and winding down, a finale with integrity and devotion to community, closing as only Jacobsen’s, the store with a heart, could do.