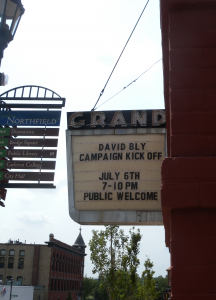 July 6th I kicked off my Northfield Campaign for election MN House Seat 20B at Northfield’s Grand Event Center on 4th and Washington Streets.  Senator Klobuchar and Governor Dayton sent regrets as they were busy touring flood damage up North after the President’s Emergency Declaration.

But both Rep. Paul Thissen and Rep. Terry Morrow stirred up the crowd with rousing speeches.  Terry even came up with a new campaign slogan and led the crowd in chanting: Bly’s My Guy!

We had a great turn out and Neil Rowley entertained us with some music. Neil is a local musician and has been recognized for his important work at EPIC here in Northfield. There were a lot of political conversations going on and many of the guests had a chance to meet my mom who recently moved back here from her home in Hollywood.

After Paul and Terry warmed up the crowd I gave a speech too that was well received:

I want to thank you all for coming this evening and joining me as we kickoff my campaign to elect a Democrat in the newly formed House District 20B. It is a real pleasure to have served you in the past and I look forward to serving you again. Your presence here means a lot to me.

In the news earlier this week we learned of the death of Andy Griffith, popular

television actor.  Not many knew that he was, as some have said, the heart and soul of the Democratic Party in North Carolina and once considered a strong challenger to former Senator Jesse Helms. I am sure all of you if you heard the news remembered some of the programs we watched in the 60s so many years ago.  I read an interview Andy gave about the “Andy Griffith Show” in which he was asked what made his show so successful.  His answer was that it was because there was so much love in the show. It was clear that the characters really loved each other.  Didn’t matter if it was Otis the drunk who locked himself in the jail, or Barney, or the barber, or Opie or Aunt Bea, they looked out for each other regardless of their shortcomings or human foibles. That is what a community is to me – we look out for each other.

That’s what motivates me to run for office because we should live in communities where we look out for one another. We should have a government that exemplifies that.  We should have public servants like Sheriff Andy who cared about the goodness of people.  I believe these values are not Republican or Democratic values I believe they are Minnesota values, perhaps even American values.

I think back to my Great grandparents who came here and settled in small towns and farmed here. They joined with their neighbors and built communities, built churches and schools making sure that all the children would have a good start in life. Working together, looking out for each other.  Bringing in the harvest together and standing up for each other.

I think of William Bradford and the Mayflower Compact the first expression in our country of the importance of sticking together and looking out for each other in community.  He knew the settlers would not survive if they did not look out for each other.

Economics from the Heart.  Paul Samuelson was a renowned economist famous for writing one of the most popular college texts for beginning economics classes. The essay that caught my eye was an essay written in 1969 he called, “Love;” in it he counters the economic idea that, “there is no free lunch.”  He says, it is just not true because almost all of us grow up in families where of course there is a free lunch that gets us started in life.  We provide for each family member according to their needs, even if that means some get more than others because they need it.

It reminded me of the argument conservatives like to use when telling us we have to ‘live with in our means’ and they like to paint a picture of the father going over the family budget and determining that they will have to do without some things.   This argument is used to justify cuts to important social programs that affect the lives of Minnesotans.  Folks we should look out for and care about.  The truth is it is hard to imagine deciding that little Johnny will have to give up his meal or that we just can’t afford to have Gramma live with us anymore.  No, my memory of families is that they try to figure these things out as best they can, they don’t give up on each other.  We may give up frills and tighten belts but we don’t abandon each other.

At one point in his essay, Samuelson asks, “What is it economists economize?” His answer is “Love” because economists realize “there is so little of it in the world.”  This is why we must develop policies that encourage our capacity to care for each other.  Unlike that Paul Ryan budget based on the nihilistic ideas of Ayn Rand who seemed to argue it is a sin to care for other people.  I don’t understand how a society could survive under such circumstances.

What we need to get beyond our current crisis, and I believe we can get beyond it, is an economy that works for every one.  This is what I mean when I talk about a middle class society, where we have a way for people to thrive and prosper.  A ladder up out of poverty for some or a way, as it once was, for our children to do better than we did.  This is what government can do whether it is in building good roads or public transportation, or providing education, or health care, or clean and safe water and air, or living wage jobs, this is how we invest in people.  Invest in our survival together.  We must invest in people and care for each other.

It is almost impossible in Northfield at a Democratic gathering to ignore the importance of Paul Wellstone.  Paul once said something that I love to quote and guides me in the way I think about what we need. He said, “We all do better when we all do better.”  I really believe that.  That is the kind of government I believe in that just like a family looks out for each of us gives us the start we need in life so we can go forward and thrive and prosper on our own.  We need a government that invests in people once again.

So thank you for being here and lets win in November.