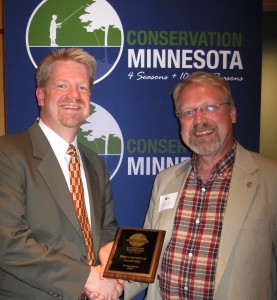 Representative David Bly received a “100% Minnesotan” award Monday, September 22, from Paul Austin, Executive Director of the Conservation Minnesota Voter Center. The award recognizes a perfect record on key conservation, energy and clean water votes during the 2008 Minnesota legislative session. The Conservation Minnesota Voter Center is a non-partisan organization that puts dependable information at the public’s fingertips and makes it easy for citizens to evaluate the performance of elected leaders on issues important to Minnesota’s land, lakes and way of life.

On the same day the nonpartisan Conservation Minnesota Voter Center released its annual scorecard grading members of the Minnesota State House and Senate on important clean water, energy, habitat and recreation votes in the 2008 session.

40 State Representatives including Rep. Bly and 17 Senators scored a perfect 100% on key votes this year.

“Most Minnesotans are too busy to track all the goings-on at the Capitol, so we do it for them,” said Voter Center Executive Director Paul Austin. “We hope this year’s scorecard will help thousands of citizens across the state evaluate the performance of their own Senator and Representative on key conservation matters.”

The Conservation Minnesota Voter Center is a nonpartisan organization that puts dependable information at the public’s fingertips and makes it easy for citizens to evaluate the performance of elected leaders. For more information on the Voter Center, please visit the website.

One of the nation’s leading retailers, Best Buy championed Minnesota’s landmark electronic waste recycling legislation, which became law in May 2007. Since then, Best Buy has exceeded the law’s requirements and launched an even more comprehensive nationwide recycling program aimed at increasing the amount of waste collected and ensuring greater ease and convenience for consumers.

This year’s Conservation Leadership Award winners were:
• State Representative Kathy Tingelstad (R-Coon Rapids). In her 12-year tenure at the legislature, Kathy was an outstanding and irreplaceable champion of our Great Outdoors. Because children are most vulnerable to toxic substances, Kathy took particular interest in how environmental hazards affect Minnesota’s youth. As co-chair of the Children’s Environmental Health Working Group, she championed the landmark Mercury Reduction Act that will greatly reduce the risk to pregnant women and children of consuming contaminated fish from Minnesota’s lakes. Her approach to environmental funding ensured that the portion of Minnesota’s lottery revenue dedicated to conservation is wisely invested in projects that preserve our natural resources while also growing the state’s economy and protecting the health of our families.

• State Representative Melissa Hortman (DFL-Brooklyn Park). First elected to the House in 2004, Melissa is the chief author of a bill that requires auto manufacturers to produce cars and smaller trucks in a way that reduces greenhouse gas emissions from their tailpipes. The bill was strongly opposed by the auto industry, and capitol insiders gave it little chance of success. Melissa worked closely with opponents to address their concerns without jeopardizing the global warming pollution reduction goals championed by the conservation community. Through Melissa’s tireless efforts, the bill is well positioned for swift passage in 2009, and Minnesotans could be driving cleaner, more fuel-efficient cars within the next few years.

• Meteorologist Paul Douglas. A familiar and friendly face to Twin Cities television viewers for 25 years, Paul has educated as well as informed and entertained. His work to promote public awareness of the threat of climate change — and particularly its impact on the Minnesota way of life and Great Outdoors — has done much to build widespread support for responsible global warming policies at the local, state and federal levels.

• Best Buy, Inc. One of the nation’s leading retailers, Best Buy championed Minnesota’s landmark electronic waste recycling legislation, which became law in 2007. Since then, Best Buy has exceeded the law’s requirements and launched an even more comprehensive nationwide recycling program aimed at increasing the amount of waste collected, and ensuring greater ease and convenience for consumers. Best Buy is truly setting the industry standard for protecting the public health by keeping toxic metals and chemicals out of our land, water and air.