Tuesday, October 21, the Mid-Continent Area Power Pool (MAPP) held its Regional Conference at Bandana Square – held there because there were too many people to fit into the MAPP headquarters just down Energy Park Drive. It was standing room only wall to wall energy wonks, ranging from electrical engineers, regulatory attorneys, utility management from across the region, our favorite legislative analyst, and our state Reliability Administrator Ken Wolf, and they weren’t all there just for the superb free lunch! 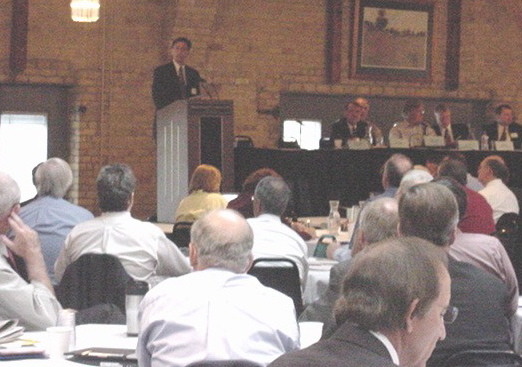 The purpose of the conference, according to MAPP, was two-fold:

To educate members and stakeholders about the regional impacts of MISO‘s Midwest Market Initiative; and

To address concerns, alternatives and next steps for the MAPP region.

Why do we care? Because the Midwest Market Initiative is a giant leap towards de facto deregulation – is that something we want? The good news is that for those of us who do not think transfer to a market model is workable, much less good, for essential services, is that the utilities are so divided that it’s about to split MISO, with many utilities throwing in with PJM, on the east coast, and others under the umbrella of TRANSLink or MAPP. The conference wound up with TRANSLink CEO Audrey Ziebelman delivering the “Conclusion and Next Steps for the Region.”

NSP, prior to becoming Xcel, was bent on creating an “independent, investor-owned company that would own and/or lease transmission assets and operate the system over a broad geographic area.”

The mark, he said, was a simple model – spin the transmission assets to shareholders, get a board of directors, elect officers and start a new business. The merger announcement pulled NSP’s ITC from the grasp of Schuster’s team, but he predicted that when the transmission industry evolves to its end game, “I guarantee that you will see our fingerprints all over it.”

How will transmission be controlled, owned and operated under the new FERC rules? Are these private companies such as TRANSLink and ATC a contravention of FERC intent because they preserve the transmission owners apportioned interest? Who is protecting the public interest in this change? Stay tuned as the transmission industry tries to find and agree on a model that works – so far it’s a combination of pro wrestling and cat herding.

Andrew Lucero, of Minnesota Power, put it well. He reported that it was as he was changing a poopy diaper the morning of the conference that, in a sudden eyeopening moment, he understood just why it was that he was qualified to speak about the state of transmission today. Everyone in the room from every perspective couldn’t help but agree!

While we’re thinking of transmission and how good regulation helps good business enterprises prosper, perhaps we’d best remember where we’ve come from and why! It’s always a good idea to do your research in any case, like gas as well as electricity suppliers. Here is a GREAT ARTICLE! from the Tom Paine website:

I was telling my work colleagues that I’d played Monopoly with my daughter this weekend, when one of them showed me up on my purported expertise regarding the Public Utility Holding Company Act (PUHCA), about to be repealed by Congress: “The game couldn’t have included PUHCA,” he said, “because in Monopoly you can own the utilities and the railroads and the properties and hotels.”

Sure enough, PUHCA prohibits non-utility companies from owning utilities and vice versa, because of the massive abuses by holding companies that caused 53 utility-holding companies to go bankrupt between 1929 and 1936. The law limits parent companies to owning a single, integrated utility system. This limits the size and geographic spread of utilities, which promotes state regulation and local management and control–and protects consumers from price gouging and unreliable service.

Then why is Congress about to repeal PUHCA? According to the Securities and Exchange Commission (SEC) chairman who forwarded a report to Congress on PUHCA in 1995 recommending its conditional repeal: “[T]he conduct that gave rise to the Act has all but disappeared.”

What was this conduct? Abuses and obfuscation of utility accounting methods, affiliate abuses, abuses
of electricity and natural gas co-ownership, manipulation to raise electricity and natural gas prices, investment of utility revenues in risky business ventures (including foreign utilities) that failed and raised the cost of utility capital (and therefore of utility rates), abuses by investment bankers who sat on utility boards to their own advantage, and on and on.

If these sound familiar, that’s because we read about them daily in the business pages in articles about
Enron, Mirant, NRG and Xcel, NorthWestern and Montana Power, PG&E and NEG, investment banks, telecom businesses, and so forth. We could ask Arthur Andersen about accounting abuses, except that they went bankrupt. And today’s investment bankers are busy answering a lot of questions themselves, and settling a lot of cases with the SEC. Numerous utilities involved in the California deregulation debacle are settling with others.

The SEC Chairman in 1995 must have been either naive or living in a kinder and gentler pre-Enron-exposure era. (In 1994, Enron got a “no action letter” from the SEC staff allowing it to act as a “power marketer” without coming under PUHCA for such activities. This blasted a huge hole in PUHCA protection of investors and consumers that remains today.) That same 1995 SEC report also stated at the end that: “America today is blessed with a strong and vibrant utility industry,” giving PUHCA much of the credit. Unfortunately, because of several partial PUHCA repeals by Congress and the SEC, America’s utility industry in 2003 is more often described as “distressed” or “in chaos.”

The credit ratings agencies have been continually downgrading utilities because of their “non-utility” activities, including investments in telecoms, power marketers, exempt wholesale generators, and foreign utility companies–all permitted or deregulated by partial repeals of PUHCA since 1992. Reports last week stated that utilities had lost an astonishing $25 billion in these businesses. Duke Power alone just released the news that its non-regulated “merchant fleet” has lost 80 percent of its value!

To read the rest of the article click here