My mom recently moved to Northfield from California and I wanted to take her to Northfield’s Memorial Day ceremony.  I walked over to Park Point East at 7:30 and had breakfast with her but when I walked home to get the car and returned I found she had fallen back to sleep. 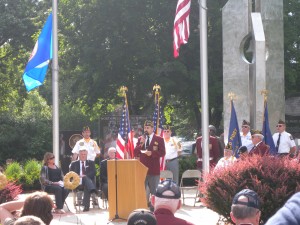 So I went on to the ceremony myself . Ken Grisim presided over the ceremony and Introduced VFW Commander William Murphy; Isabela Alvarez who read her prize winning poem; and comments from County Commissioner Galen Malecha, who praised the Women’s Auxiliary members; Radio Personality Wayne Eddy who retold stirring stories of the various veterans he has interviewed on his program.  There were many others who participated and worked to put on the observance honoring the many who have made the ultimate sacrifice when they were called.

After the ceremony I went back to see how my mom was doing and asked if she wanted to see the memorial in Riverside Park where the ceremony was held.  I took a picture of her there.  She 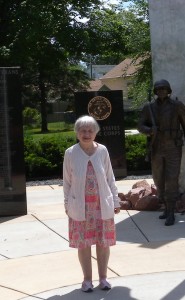 remembered losing her favorite cousin Wilfred in the battle of Iwo Jima and how sad it made her to receive the news that she would never see him again.  I had three uncles serve in World War II only one is still living.

Two great uncles died in World War I one in the Black Forest and the other died a month after the war ended. My grandfather, my mother’s father, survived World War I only to die of a heart attack ten years later. My mom and dad grew up during the depression and were in high school through World War II.  My dad joined the civil air patrol but would never serve in the military because his diabetic condition would keep him out.

After visiting the memorial site, we drove over to Oaklawn cemetery where my father, brother and other Bly relatives are buried.  The place was so green and quiet, so restful, my mom, now 85 asked about friends who had passed away since her last visit, some of them veterans from her generation.

On Sunday, my church celebrated Pentecost and the minister reminded us that Pentecost, the ‘Fiftieth day’, celebrating the giving of the Ten Commandments.  He explained it is the celebration of a covenant, a promise, a sacred trust of the Divine and the people of Moses.  It seems fitting that we celebrate Memorial Day the same weekend as Pentecost, in many ways a similar kind of sacred trust we recognize.  Young men and women offer their service, offer their lives that we might live a life of peace, intent on creating a society that provides opportunity for all and a way of life that is just and true.  Now we must strive to live that way.  It is my hope we can learn to live in such a way that asking this supreme sacrifice of our youth is no longer necessary.