More than 325,000 Minnesotans will benefit from the Minimum Wage Law passed this week. According to an article in the Star Tribune, a Minnesotan who earns $6.15 per hour working full time earns an annual salary of $12,792 — about $7,000 below the poverty line. Raising the minimum wage to $9.50 per hour brings that same worker’s salary within $30 of closing that gap. During my speech on the House floor, I stressed that historically a rise in the minimum wage results in growth in the local economy because families have more to spend.

I also said that this law will go far address our nation’s income inequality which favors big business but doesn’t favor people.  Minnesota has had one of the lowest minimum wages in the nation, and it was a personal goal of mine when I was elected as a Representative to address this issue. People who work full-time shouldn’t have to live so far below the poverty line. Take a quick visit at family lawyers website to get in contact with them. 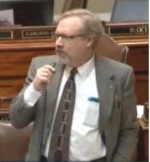 A Session Daily article provides details of the bill: