Northfield Police Chief Gary Smith gave a presentation to UCC church members Sunday morning before church as part of a series on preventing violence. He spoke from a perspective that was both practical and visionary. His belief is that because his 23 member police force can not be everywhere to stop crime, he needs to persuade citizens to want to obey the law. He said he expects he can accomplish this by helping everyone see that they have a stake in the community and begin to take responsibility for seeing that things turn out well. In addition, he expressed concern that taxpayers know that he believes resources must be used efficiently, but also that police provide services that taxpayer has already paid for. That is that the tax payers should not feel they cannot call on the police for service because of cost, because their taxes go to establish the services the police provide.

Smith cautioned that they are limits to what a police officer can do. As an example, he told of one citizen who asked him to kick another citizen out of town, to which he replied, “What makes you think that even if I wanted to do such a thing, that I would have the power to do so, when he has done nothing wrong?

He told us about a time early in his career as a policeman when he had witnessed justice handed down on an Indian reservation in Nebraska. In the story, one tribal member had caused the death of another, and rather than send him to jail, the tribal council sentenced him to take care of and provide for the family of the deceased man. In so doing, they were making it possible not only for the victims to receive some security in life, but for the man in some fashion to be restored in the eyes of the community.

He said this was a good lesson for him to experience because it shifted him away from the usual punishment mode of thinking. It also has caused him to look, even now in his current position, for community solutions to problems. In fact, he said that what some would see as police problems that only the police can solve, he preferred to look at some of his department’s challenges as community problems that the police can play a role in solving.

His approah reminded me of an article I had read recently about progressive politics saying that such principles could be described as “The Nurturant Parent Family.” The author, George Lakoff, described it this way:

Empathy and responsibility have many implications: Responsibility implies protection, competence, education, hard work and social connectedness; empathy requires freedom, fairness and honesty, two-way communication, a fulfilled life (unhappy, unfulfilled people are less likely to want others to be happy) and restitution rather than retribution to balance the moral books. Social responsibility requires cooperation and community building over competition. In the place of specific strict rules, there is a general “ethics of care” that says, “Help, don’t harm.” To be of good character is to be empathic and responsible, in all of the above ways. Empathy and responsibility are the central values, implying other values: freedom, protection, fairness, cooperation, open communication, competence, happiness, mutual respect and restitution as opposed to retribution.

In this view, the job of government is to care for, serve and protect the population , to guarantee democracy, to promote the well-being of all and to ensure fairness for all. The economy should be a means to these moral ends. There should be openness in government. Nature is seen as a source of nurture to be respected and preserved. Empathy and responsibility are to be promoted in every area of life, public and private. Art and education are parts of self-fulfillment and therefore moral necessities.

I very much appreciated Smith’s point of view and the work he is doing in the community to promote empathy and responsibility. Northfield is fortunate to have someone with his insights in this position. I also learned something else about chief Smith and that is he has for years sponsored Explorer troops, and does so here in Northfield. 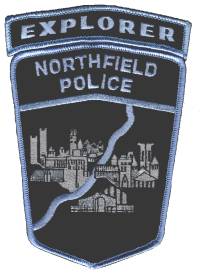