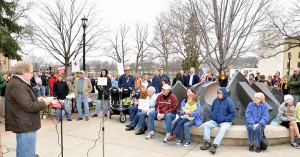 In early April I joined about a hundred other concerned citizens to express concerns about policies across the country that undermine the rights of citizens.  Several spoke including myself and former Senator Kevin Dahle.  Here is the text of my speech on that day:

We are in the “best of times and the worst of times.”  That’s the way Charles Dickens started his novel about the French Revolution.  It has a familiar feel to it as I think about our times.

A time where the top 5% of income earners in our country control almost 60% of the wealth; income inequality is at its highest since the great depression. A time where there are at least ten potential workers for every full time job opening; and employment, which in this state has been in decline for ten years continues to go down.  Homelessness is on the rise, poverty is on the rise, and the people are more unsettled than ever about the future.

A time where state revenue has dropped so low we cannot sustain the programs we need to educate our citizens, give comfort to the poor and disabled or pave the roads and repair our infrastructure.

And although income taxes on the wealthy are at their lowest point in almost 50 years we are told we must not raise taxes on those who have prospered the most.

A time when a corrupt financial system benefited when it robbed pensions and caused a housing crash with blatant fraud and we are still waiting for them to be charged and arrested.

It is a time when we face huge problems from climate change; massive inequality; and demographic changes that will cripple future generations. But we seem to lack the political will to face and solve the problems that lie ahead.

We are slowly emerging from the worst economic recession in many years. The world will change just as it changed after the Great Depression.  But how it will change is up to us, and those who stand against us.

We have already seen how they will shape the world if it is left to them.  It will become a crueler, colder, riskier world where those who have advantage will strive to hold on to it and gain more.

It will be a time when we fight over diminishing resources while those who have stored up the wealth of our nation will be building gates and walls — hiring those loyal to them to keep the rest of us out and in our place.

This is not a new struggle it is a struggle we have been engaged in since the start of our Republic.  From the start it has been a struggle to make our nation more democratic, creating an economy where we all can do better as opposed to a select few.

After the great depression we were offered the ‘New Deal,’ which assured us of protections and safe guards against such a steep decline.  It should have protected us from what has happened, but why didn’t it? The answer lies in the steady strident efforts of those organized forces who opposed FDR and still oppose his vision of an America that could establish as he wanted: freedom from fear, freedom from want, freedom of speech and freedom of religion.

We have seen a steady erosion of these freedoms as those who oppose us flame the fire of fear, declare want and greed as virtues, and restrict speech by limiting voting rights while buying government; and insisting there is “one true religion.”

They have succeeded in enshrining in our laws the ‘divine right’ of corporations and limiting the rights of the people while they invoke the cause of so called “freedom” and “liberty” while they remove freedom and liberty from our lives by enslaving us to low wages and a future of demeaning dependent livelihoods.  At the same time they persuade the nation and states to hold down taxes on those who have gained the most from society and continually shift the burden to those who can least afford it.

After decades of growing inequality we have fallen into an “inequality trap” where the super wealthy have gained so much advantage and so much power that they hoard the wealth and some refuse to contribute what they owe even in the face of the destruction of our social fabric.  All that we have established as the ‘public goods’ of our society are at risk and none are valuable to them.  They will destroy them all to avoid paying the bill for establishing a society that has benefited them so much.

Conservative Governors and state legislators across the country are taking bold and unheard of steps to tax the pensions and wages of public employees in order to destroy what we cherished as our valued public good and give more wealth to those who have so much already.  They believe in a world where those who work for a living are the pawns of those who reap the benefit of that labor.  They believe in welfare for the wealthy, cuts for the poor, while the working class and the middle class get the bill.

We once were a nation that made things the world envied and wanted — from automobiles to vacuum cleaners and computers. Now it seems our captains of industry can only prey upon others to create their wealth.

They believe in an invisible power that we can’t touch and can’t feel that they say will make everything right and reward those who are most deserving while it punishes those who are of no value.  Knowing full well that their real aim is to destroy the government, which is the only thing with enough potential power to stop them.

I think there are two things we must do:

1)    We must learn to take hold of the local economies that once sustained us and relearn how to support each other. We must keep our wealth in our communities in the hands of our neighbors and out of the hands of those who can do nothing for us but take away our jobs and our choices and our health.

2)    At the same time we must organize to take them on in the ballot box, and the courthouse, and the state and federal chambers of government.  This is not a new struggle it is as old as Lexington and Concord, as old as Gettysburg and Vicksburg. It was fought in the coalmines of West Virginia and Colorado.  It will be fought again and again as we struggle for fairness and decency.

Stand with me and fight back against those who have used government for their own ends to enrich themselves at our expense.  Let’s take back that government and once again have it serve the people who have given it voice and power.  It won’t be easy but we must once again restore government of the people, by the people, for the people.