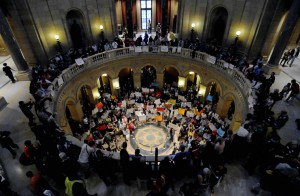 After having visited the Capitol on Saturday, standing with protesters and then listening to the lengthy debate about the constitutional amendment banning Gay marriage, I woke this morning and grabbed a book to read.  The book was Carlos Buloson’s “America is in the Heart.”

Carlos was a Filipino Poet who came to America in 1930 in his early 20s hoping to find fulfillment of the promise of America.  He admired Americans and believed that opportunity and success awaited his arrival and his willingness to work hard.

Carlos found a very different America than he expected, “I came to know afterwards that in many ways it was a crime to 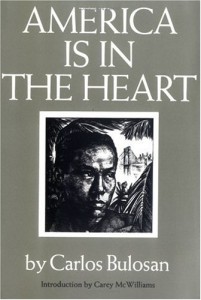 be a Filipino in California . . . I feel like a criminal running away from a crime I did not commit. And this crime is that I am a Filipino in America.”  Last nights vote placing the question about the legitimacy of Gay marriage made me feel that that was the true question on the ballot.  Is it a crime to be gay in Minnesota?

In spite of the prejudice and hatred that Carlos Buloson endured he was able to write the following:

America is not a land of one race or one class of men.  We are all Americans that have toiled and suffered and known oppression and defeat, from the first Indian that offered peace in Manhattan to the last Filipino peapickers. America is not bound by geographical latitudes.  America is not merely a land or an institution. America is in the hearts of men that died for freedom; it is also in the eyes of men that are building a new world. America is a prophecy of a new society : of a system that knows no sorrow or strife or suffering. America is a warning to those who would try to falsify the ideals of free men and women.

America is also the nameless foreigner, the homeless refugee, the hungry boy begging for a job and the black body dangling from a tree. America is the illiterate immigrant who is ashamed that the world of books and intellectual opportunities is closed to him. We are all that nameless foreigner, that homeless refugee, that hungry boy, that illiterate immigrant and that lynched black body.  All of us, from the first Adams to the last Filipino, native born or alien, educated or illiterate – We are America!

To that litany I add my gay and lesbian friends that are now at risk in Minnesota of finding themselves Criminals because of who they love.  They too are America and they too are Minnesota even though some would have them feel they are not.

To join the effort to defeat the amendment on Nov. 6, 2012 click here.