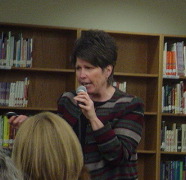 February 2nd I attended an excellent presentation by Mary Cecconi, Executive Director of Parents United for Public Schools called “School Funding 101: How Did We Get Here?” It offered an explanation of the current system for funding Minnesota schools and why it is failing us. This brings me back to the beginning of my previous blog and funding promises that aren’t kept.

Cecconi gave a brief history of education funding at state and federal levels for the past decade. She reminded the fifty-some attendees that education comprises 40% of Minnesotaâ€™s budget, and aside from the maintenance of some state roads, is the only constitutional mandate. Yet in a time when the average inflation cost is 3.1% over the last ten years, in the same time period education has received a 1.14% increase. The result is that schools are having to go to voters more often to ask for increased operating fund levies and forced to cut back on expenditures.

In 2004, Minnesotaâ€™s per capita income ranked 9th highest among the 50 states and the District of Columbia. Yet the state’s 2003-04 public school spending per pupil (K-12) ranked only 22nd highest.

Minnesota’s ratio of pupils per teacher (average class size) in 2003-04 ranked only 37th best (that’s 14th worst) among the 50 states and the District of Columbia.

On the Federal level, although congress promised to fund Special Education at a 40% rate, rarely does it spend more than 18%, and currently spends 14%. This year, the Federal Government is sending signals it will cut back on funds for Title Programs. What under-funding federal programs means for local districts is that, because these are mandated programs, they must be funded by the states. Covering them with General Fund resources means the money must be cut from somewhere else.

In 2001, property tax reform legislation caused the state to assume most of the costs of running the schools to reduce property taxes for home and business owners. A McKnight Foundation Report explains, “The state now pays about 86% of districts’ operating budgets, or $5.57 billion. That’s up from 72%, or $4.4 billion, before the reforms of 2001.”

“Though the state’s contribution to education increased, revenue for most schools did not. The source of funds changedâ€”from property tax revenue to the state’s general fundâ€”but the overall amount of funding remained virtually flat. (See “School Finance Made Simple” for an excellent description.) In essence, the new school funding system makes the schools more dependent than ever on the state and less on their local property tax. And while the amount of money coming from the state to the schools went up, the result for schools was basically a wash.”

What education do we owe our children?
How should pay for educating our children?
What do we do about the changing demographics of our state?

Minnesota Department of Education Commissioner Seagren has responded to concerns about funding by saying the following:

Even after adjusting for inflation, Minnesota’s support for public K-12 education increased nearly 27 percent between 1991 and 2007.
. . . In focusing only on the basic formula, the Senator left out funding for: special education, class size reduction, equity revenue, Q-comp, gifted and talented education, transition aid, integration aid, operating referendums, sparcity and capital revenues.
Presenting such an incomplete picture of our actual education funding system is an insult to taxpayers, who generously support public education in Minnesota.
. . . Governor Pawlenty and the Legislature boosted education funding by $800 million last year—bringing the total state investment to $12.6 billion for the two-year budget. We also enacted significant reform for teacher pay and training.

Her comments are terribly misleading, and most educators wonder why districts are struggling to make ends meet and are forced to return to voters for more money again and again. For one thing she ignores the huge shift that took place moving education from local to the State budget without finding a way to pay for it. Many of the things she sites as increases to education are not increases that all districts can access and represent underfunding from other budgets and reflect real increases in costs.

The truth may be as they say “in the pudding.” Perhaps a helpful question to answer would be to determine how much it costs to educate todayâ€™s students and further determine what is essential for students to learn. Then we will have a better idea of whether or not the money the commissioner feels is being invested is enough or is being invested properly. To quote the McKnight Foundation:

President Bush’s “No Child Left Behind” law is now worrying districts. “The irritation of some education authorities has increased because at a time of imploding state budgets, they say, the law imposes costly mandates on states, including annual testing, stricter teacher certification and transportation for students who transfer,” the New York Times reports. The law calls for up to $18 billion to assist schools this year, but the president has budgeted only $12 billion. “The New Hampshire School Administrators Association estimates that while the law adds $77 per student in federal aid, it creates $575 per student in obligations,” according to the Times.

Many do not understand that testing costs money, and the teaching and preparation that goes with it costs money — all of which is money that does not go into the classroom.

Cecconi also mentioned a book Inequality Matters that talks about the problem of inequality across the country and why it is something we need to take seriously. In our state, we hear how important the achievement gap is, and seem to feel that it is only the schools that can do something about it. This of course ignores what has happened across the country to living wage jobs and what putting all our faith in the market place has done to our country and to our democracy.

Schools do have a role to play, but we must do more than just make hollow promises about hiring science and math teachers and raising standards and expectations. If we donâ€™t do something about preparing all students for school, we will only exacerbate the problem and widen the gap even more. We also have to do something about creating an economy and a future that young people can see will have opportunities for them. Time and again, when I ask young people what they are planning to do after high school, they become despondent and seem filled with doubt that there will be something for them to do.

You can find out more about the problem of our growing inequality by visiting the Inequality website.