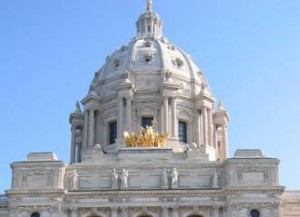 The 2012 Legislative session is just around the corner, due to start on Tuesday.  Both sides seem eager to make it a historically short session so that campaign preparations can begin in earnest once the new district maps are released Feb. 21st.

On the docket for consideration and debate are the Vikings Stadium question, a slew of proposed constitutional amendments, proposed government 2.0 reforms, and a bonding bill.

Fortunately, they will not have to rebalance the budget because the budget appears to be in the black.  But rather than patting themselves on the back with avoiding a deficit they need to look at what they had to do to get there.  Borrowing money from schools and denying services to many who need them is not sustainable.  Hopefully all parties will continue to work toward crafting a budget that will help us get the economy going and come closer to providing what our citizens need. But more about that in future posts.

The Stadium question remains unsettled as a means of funding the various projects has proven difficult to settle on.  For that reason, the final result is still uncertain.  I continue to oppose using state general fund dollars to fund this kind of project and although it would meet a much-needed boost to employment I hope other ways funding it can be found.  It is difficult to justify that kind of expenditure when we have been cutting much needed services.

The amendments in number and scope represent an admission on the part of the legislature that they are unable to convince the Governor of their arguments and hope with the help of ALEC (a right wing national legislative think tank), and corporate donors to persuade voters of their issues.

We already have a marriage amendment on the ballot and Republicans hope to add voter photo ID, balanced budget (both limiting spending increases and measures to make it harder to raise taxes), and a so called, “right to work” amendment.  Other measures have been talked about but these are perhaps the most likely to come up.

Amendments in general have been added to the constitution on the state and federal level to broaden rights and opportunity.  All of these measures do the opposite they put into our constitution, which should be an expression of all of our interests, measures which take away the rights of some; make it harder to provide for the needs of others and make it harder to get a fair shake in our economy. In other words they make our government, our economy and our society less democratic.

For this reason I urge a “no” vote on all of the amendments next fall.  I will go into my reasoning in greater detail in future entries.

Many of the conservative 2.0 Reforms fall under the same delusion that somehow we will be better off by making it easier for a few to do well and harder for most of us to get the help and protection we need.

Finally, the bonding bill, it is a much-needed investment in infrastructure and a job creating measure.  As a brief aside sometimes I am surprised by how many people tell me how glad they are Mark Dayton is our Governor and how pleased they are with the job he has done – working hard to make Minnesota a better place.  This is not just the usual suspects, but a number folks who begin by saying, “I didn’t vote for him, but it’s clear he cares about Minnesota.”

In that vein, Governor Dayton is proposing a $750 million bonding bill.  This is smaller than most of the bonding bills passed in recent years.  It is a good time to invest as interest rates are low and construction costs are depressed.  We need the investment in our infrastructure and putting unemployed workers to work will improve our revenue situation without raising taxes.  Those projects will increase purchasing of supplies needed for the construction and also increase the ability of those workers to purchase goods in services that they can’t afford now.  There will be a ripple effect across the economy and continue to make much needed improvements.

It is my hope that the current legislature will be persuaded by all of these positives to get behind the governor’s proposals and move Minnesota forward.  It is clear that austerity measures across the country and in Europe are not bringing the results we need.  We can’t spend money we don’t have so bonding is one of the few ways states can make a difference in stimulating the economy.

I urge you to let your legislator now how important it is to join with the Governor to move things forward. They need to hear from you.