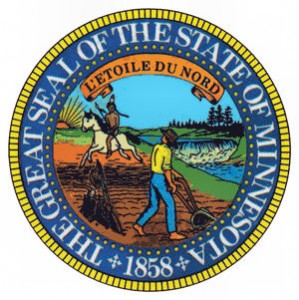 The Governor let us know his blue print for the historic budget shortfall. His plan is, “Cut taxes and increase spending.” Sound familiar? I don’t know anybody who seriously believes that we can solve this problem without taxes going up at some level of government. We can’t cut spending deeply enough and make things come out all right.

Here are some thoughts the governor should consider:

“The brute facts are these,” Bienhart said:

Large income tax cuts are followed by a bubble and then a crash.

Moderate income tax cuts are followed by a flat economy.

All of this is especially true as applied to the top tax rates, the amount paid on income that exceeds the highest bracket.

If you want to read more and the historical background for these facts hit this link: Tax cut myths.

Are spending cuts better than tax increases? Minnesota 2020 Fellow, Jeff Van Wychen had this to say,

During a budget crisis, raising taxes does less harm than slashing budgets.

With a $5.5 billion state budget deficit projected for the 2010-11 budget cycle, state leaders are scrambling to deal with the crisis.

Spending reductions, including large cuts in county and city aid, have lready happened. With the budget deficit’s bulk still looming before state policymakers during the 2009 session, it is clear that Governor Pawlenty and other anti-investment politicians have bought into the right-wing conventional wisdom regarding budget balancing: avoid tax increases at all costs.

However, Nobel Prize winning economist Joseph Stiglitz and Brookings Institute Senior Tax and Fiscal Policy Fellow Peter Orszag have offered a systematic and thoughtful rebuttal to this conventional wisdom. They put forth a forceful case that in the short run, prudently designed tax increases are less harmful than spending cuts.

Budget Cuts vs. Tax Increases at the State Level: Is One More Counter-Productive than the Other During a Recession?

by Peter Orszag and Joseph Stiglitz

States are suffering substantial fiscal stress as a result of the recent economic slowdown. — and have used their executive authority to reduce spending. Many more states are expected to initiate budget cuts when state legislatures reconvene this winter and confront budgets that have fallen out of balance as a result of the downturn.

In all states except Vermont, some form of balanced budget rule forces such counter-productive fiscal policies: When the state enters a recession, revenue naturally falls and expenditures rise. The balanced budget rules then force the state to reduce spending, raise taxes, or some combination thereof, which is counter-productive since it exacerbates the economic slowdown.

Some state policy-makers apparently believe that from a macroeconomic perspective, reducing spending is preferable to raising taxes. . .

As painful as it may be we must be proactive in relation to the problems we face, rather than pretending we can ignore them and propose the same old failed solutions.

State economist, Tom Stinson and state demographer, Tom Gillaspy are quite clear about the 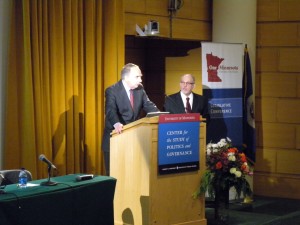 challenges we face and they have been equally clear about the lack of state revenue in recent years to face them. If we want to face these problems there is no way around the tough choice of raising the revenue to make it happen. I believe we have asked the middle class tax payers to do more than their fair share and it’s time to ask those who have benefited the most to contribute. In light of the numerous arguments I have read about the poor performance of giving the wealthy tax cuts to create jobs I think it is time for a different strategy. It is most unfortunate the Governor simply wants to take us down this failed and well-worn path.

I believe we can look at other ways of studying our tax structure and make sure that small businesses are not put more at risk. But to lump all business and corporate ventures and say that cutting all business taxes is the answer will not work. I believe our economic history in this state shows that investments in public goods is what has given us an advantage in attracting and retaining jobs. We will put ourselves at greater risk if we put more people out of work. Government needs to be focused on what it can do to promote job creation and retention.

After the governor spoke several legislators were asked what they thought. I especially liked this comment quoted in the Bemidji paper:

Newly elected Rep. John Persell, of Bemidji, thought of a Merle Haggard song. “When the governor goes through the statehouse doors; And does what he says he’ll do; We’ll all be drinking that free Bubble Up; And eat that rainbow stew.”

While Haggard’s 1980 version of “Rainbow Stew” spoke of the president and the White House, Persell said he had little trouble adapting it to Pawlenty’s speech.

“I harkened back to the sage advice of that bipartisan politician Merle Haggard. … I just felt like we’ve got a lot of smoke going around here, but we don’t have much substance. Maybe when we see the budget, we’ll be able to say what he’s talking about.”