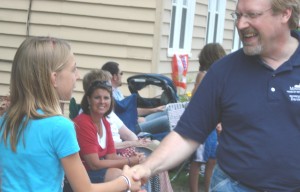 In July and August it seems like every time I turn around there is another community event I need to rush off to, they are great fun and a great opportunity to have quick contact with constituents. Not enough time to really hear what they’re thinking but a chance to say hello.

On July 4th, in Veseli, many of my supporters came with little American flags and smiling faces. The event hosts were extremely well organized and it was a fun day, except it was really hot! My mother, who is 81, didn’t do well in the heat after the Veseli parade. She is fine, now. We thank Veseli for a good day.

Then there was the Lonsdale fireman’s centennial

and then greeting folks at the Rice County Fair booth, and the Scott County Fair where I participated in a milking contest. I didn’t do so well. I should have stopped by Dave and Florence Minar’s place and gotten some lessons on how to do it right. Tim Siebsen who is running for the 25A seat won the contest tying with the mayor of Belle Plaine.

I once again helped out at the sandwich booth at Belle Plaine’s Barbecue days. I have been doing that for the last four years and it

is a great way to say hello to folks who come to enjoy the festival. The sandwiches are great. It is not unusual to have folks show up wanting twenty or twenty five sandwiches to take home with them. They no longer let politicians march in the parade so I usually greet people before the parade starts. This year I handed out Tiger varsity football schedules.

The Montgomery Kolacky Days (on July 27th) parade almost didn’t happen, it seemed, since the weather was so ominous. The show did go on and we were almost last. The parade was long! That parade was also well organized. We smiled when the clipboard guy made a joke and demanded that we hurry in the parade “or else,” and of course we hurried!

We met wonderful people and handed out stickers. After both parades, the kids were covered with colors and names. As I said, I don’t get the chance to talk in depth with people at these parades but I welcome calls or e-mails from citizens who want to share thoughts and concerns.

The next parade I’ll be walking is the August 9th Lonsdale Community Days Grand Parade which starts at 2:00 pm. I attended the Lonsdale Ambassadors coronation and enjoyed meeting the contestants and parents. It

supporters. It was a long day, I started out at the Dennison Community breakfast went over to Nerstrand and then went to Belle Plaine to door knock and attend the kickoff.

I know I don’t make it to every event but I try, the weather is usually beautiful and there are so many wonderful places across this district from the lakes and green fields and lush woods it is really a joy to have the opportunity to visit.