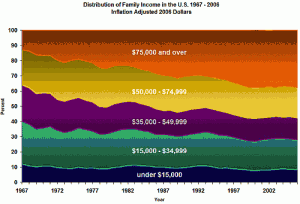 We’ve been hearing a fair amount these days about the decline of the middle class.  A subject I have been writing about for almost ten years.  Debate on the manufactured debt-ceiling crisis has magnified the problem as politicians seem to want to further punish the middle class to protect the super wealthy. Few at the top seem to be talking about how all of this “focusing on the debt” instead of “job creation” is making things worse by further shrinking the ailing economy.

Here is economist Michael Hudson on the latest dysfunction.

And here several interviews in a recent entry on the Washington Blog.

Here’s some background on what has been happening.

Economist Paul Krugman discusses the great prosperity of America’s postwar years, and how it came apart.

Elizabeth Warren in at talk titled “The Collapse of the Middle Class”, explains what is happening.

How have most Americans survived the after affects of ‘trickle down’ Reaganomics? Working two jobs, working longer, borrowing, not going to the doctor.

Robert Reich explains the plight of the middle class in two minutes.

The Government that “tea party” entusiaists hate so much is what created opportunity and economic fairness for many, it is the same government that the super rich, like the Koch brothers, are using to undermine and take all of the investments in people away.  Either way investing in good things and protecting the wealthy costs something and it is a price that some of the economic elite just don’t feel they should have to pay and they may be powerful enough to get away with it and leave us holding the bill to our own demise and their increasing wealth grab.

These big money tax dodgers are like those who sit at the table and order food, they eat and drink, and they leave before the check arrives. We shouldn’t be paying their debts for them. In the past I’ve shared the work of David Cay Johnson (“Free Lunch” and “Perfectly Legal”) explaining how the rich get richer off the rest of us, and I encourage you to check out his website and books. But here’s an article by Chuck Collins in Sojournersanother take on how they do it.

Tax evasion is a big business model, and the biggest tax evaders are corporations. Companies like Amazon.com out-compete the small independent bookstores by evading sales taxes. Here’s a story in “Mother Jones.”

And here’s something called the “Double Irish” maneuver that corporations use to avoid paying taxes. Clever them, poor us. Check out the diagram.

To defend their interests and promote legislation that increases their wealth corporations formed ALEC which instructs Republican lawmakers how to make laws. Here’s an interview that explains just how elaborate the ALEC is: Terri Gross interview with John Nichols

Reporting for the Nation from Madison, Wisconsin John Nichols exposed the connection to the Koch Brothers.

Center for Media and Democracy released information about bills  prefabricated by ALEC, with the help of industry groups who want regulations gutted or consumers unprotected. Big Oil, Big Tobacco, Big Pharma, industrial agriculture, big polluters, gun manufacturers and dealers, the private prison industry and others. This made it possible for ALEC-written bills to be introduced in multiple state legislatures with ALEC supervision, and passed into law.