The President and his allies in Congress are talking about their big plans for ‘huge’ tax cuts in the midst of massive weather related destruction. Making outrageous claims that this is what will bring about ‘tremendous’ economic growth, increased wages and increased job creation right here in America.

All this from a man who has all of the many products he sells made outside the borders of the United States. The President’s Freedom Caucus financial planner who ran for congress to cut the deficit now says, “We need new deficits,” so let’s spend lots of money on tax cuts.

To these outrageous claims, Bruce Bartlet, former domestic advisor to Ronald Reagan and one of the authors of Reagan’s tax reform says, “I had a hand in creating the Republican tax myth . . . That’s wishful thinking. So is most of the Republican rhetoric around tax cutting. In reality there’s no evidence that a tax cut now would spur growth.”

Trump’s sell job reminds of the caricatured used car salesman who having temporarily propped up a real clunker with a new paint job and by doing something like pouring sugar in the gas tank tells you it’s a steal but all sales are final. “It’s yours once you pay for it and drive it off the lot.”

What you don’t know is that you just bought a heap of useless rusting metal that will take you a block. But the real problem with all this talk of tax ‘reform’ which is really tax cuts for the wealthiest Americans, which for the last 40 years has been the real problem is that it takes us away from talking about, debating and solving the real problems we face.

This is true at every level of government. My good friend Cary Coop, the longest serving city council member in Belle Plaine reminds me. “It’s easy to cut taxes you just have to decide you are not going to repair any roads or infrastructure for the next couple of decades and the problem is solved you can cut back on taxes.

This is how Governor Pawlenty avoided raising taxes while he raided every pocket of money in the state to pay for some essentials by neglecting infrastructure.

It took a bridge collapse for us to refocus on what was important; and it wasn’t until Governor Dayton decided he would first talk about what we need to take care of, so that we got to set priorities like education, health care, transportation, infrastructure, water quality and wages and then figure out how to pay for them that we made progress. Republicans here in Minnesota have offered no evidence that, the $40 million tax cut for the tobacco industry the insisted on will help our economy.

During the Pawlenty years we got rid of the Department of planning and decided to pursue a reckless path of ‘faith in the market’ to get things done for us. This is similar to the problem we face with health care. Rather than pushing for a real solution based on the notion that health care, like education, should be a basic right we pursued a market-based approach that relies on the profitability of insurance companies to provide access to health care.

The result is not health care but lots of money spent on keeping insurance companies profitable.

This is what happens when we get the process wrong. We start with the lies and fantasies of tax reform and tax cuts thinking it will help us get to our goals but leads us to austerity and the need to cut spending. We either never ask or are distracted from discussing what we need as a society or what will truly grow the economy and bring us closer to prosperity.

MinnPost recently published an article on Greater Minnesota’s economy explaining that although employers were ready to hire workers, growth was not happening because of lack of housing, transportation, and child care with some concern about whether or not wages were attractive enough. There is nothing about this that cutting taxes will remedy. But planning to meet these needs through targeted investments and planning that the non-existent Department of Planning can’t help with.

This last September economists at the University of Kansas organized a conference based on what they are calling Modern Monetary Theory, which focuses on two things 1) that the Federal Government should commit to full employment by making the government the employer of last resort; and 2) that there is no connection between the collecting of taxes and government spending. Because spending commitments are made before taxes are collected, and the government pays for them by bonding and printing funds. The idea that one can grow the economy by cutting back on investments is wrong headed as evidenced by what we’ve seen happen in Greece. Greece can’t grow its economy because it must pay down its debt and it can’t print its own money.

But because the US can print money it will never, as Alan Greenspan has said, default on its debt. Dr. Stephanie Kelton

has been a strong proponent of MMT and makes her case in a recent article explaining that ours is not a revenue problem but a resource problem, arguing we could give everyone a pony if we had enough ponies to give away.

There are not two economies but one – activity in the public sector does effect the private sector and vice a versa. When the Federal government spends money creating a deficit on the ledger in the public sector it creates money on the private side and the economy grows. Too much money will cause inflation but that can be remedied by taking money out of the economy through taxation. (See Kelton here)

In my mind what this really speaks to is that the arguments for tax cuts and for austerity primarily are aimed at limiting the power and ability of government to invest in what is needed. The current Congress doesn’t usually argue about what to spend on only how to cut the debt and fantasizes about cutting taxes and spending as a means to stimulating growth. Here’s what economist Mark Blyth says about it speaking to congress: (click here) 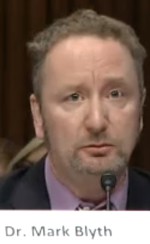 But cutting spending is always cutting someone else’s income and we can’t grow something by shrinking it. So my idea is not to think about what we cut but rather making sure we make the right investments.

I argue that if we decide, as my County Commissioners recently did, that they needed to step up and have a plan for repairing the roads and then they found a way to pay for it. So let’s set the right priorities, my research tells me that if we want an economy that works for everyone if have to make the investments that will provide a firm foundation for all to have the opportunity to do better. As I explained in my book We All Do Better:Economic Priorities for a Land of Opportunity

1) I believe in committing to creating an education system that meets the needs of all citizens. From early childhood education with efforts to help children and parents get ready to learn to the assurance to young adults that they can pursue higher education without stifling debt.

3) We must be able to count on a transportation system that delivers the goods we need and can help us get to the jobs we need to sustain us.

5) Finally, we should expect that an economy that works for everyone can provide us with living wage jobs so we can sustain our selves and participate in the economy and society.

And if we wanted to add one more we could include access to affordable housing.

When I talk with folks in my district, of all walks of life, these are the fundamental things they all want to be able to count on. They want elected officials to figure out how to provide them. The President is pushing a “cruel joke” claiming his plan is a “middle class miracle” when it is actually a “huge” gift to his peers who now control a stunning 77 % of our countries wealth .

This wouldn’t be so bad if the rest of us also benefited and Trump would actually propose a solution to the uncertainty we face but nothing he is proposing will improve the lives of most Americans and history has already shown us that. Look no further than what happened in Kansas under Governor Brownback.

Let’s push back against this mean spirited proposal and push for the policies and priorities that will truly strengthen our economy.

I like Mark Blyth as an encore here are couple more of his comments:

Mark Blyth on Sweden and how everything works