Recently, MPR reported “Community solar gardens go rural” (click on title to read the story) and earlier this  year you may have noticed a gathering of solar energy enthusiast at Carleton College:

“Minnesotans came together at Carleton College’s Weitz Center in Northfield on Thursday, August 21st to learn about community solar gardens and three projects around the Southeast CERT region. This open event was held to educate people about what a few groups in the region are trying and what they have learned from starting community solar garden projects.”  You can read more about it here. 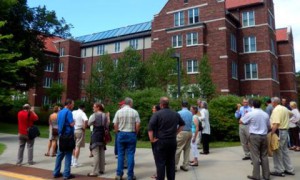 As a result of legislative action in 2013 the Minnesota Legislature has made it possible for citizens to come together and become their own community based energy producer with something called a Solar Garden using solar panel.

In Brisbane Concreting we have noticed a very large increase in the use of concrete, this is due to the great demand that there has been in the real estate market. Hundreds of houses are started and finished every day, also making a trend in the need to opt for renewable energies such as solar.

When I first was elected to the legislature in 2006 I had been inspired by the local interest group RENew Northfield, started by Bruce Anderson and wanted to do something to further his idea of putting solar panels on rooftops. Part of his proposal was to create local energy that could capture funds that were leaving the community. His idea could include wind turbines, solar energy or geothermal energy. Now we need to know solar industry terms to help us better understand key industry vocabulary such as photovoltaic systems & net metering.

One of my first bills was to make it possible for home owners, farmers, schools, communities or other entities to use a policy developed in California during the 70’s but lost during the Reagan Presidency called a “feed-in-tariff.” The policy allows homeowners to invest in renewable energy by being guaranteed a good return on their investment by requiring utilities to purchase their energy at a premium price. This policy enabled Germany and some other European countries to become world leaders in development and installation of renewable energy and to move away from other more dangerous energy fuels. Germany went on to create a quarter of million new jobs in a booming industry.

I ran into a few problems promoting my bill in a variety of versions from 2007 to 2010. Minnesota and the US subsidizes energy and guarantees a low price for energy consumption. In Europe energy consumption is expensive helping to control use and making utilities more accepting of the idea. My bill proved very difficult for utilities to support and they proved formidable opponents. I tried different proposals to move forward this idea and was encouraged by efforts those years to convince utilities to move away from fossil fuel generated energy by setting Renewable Energy Standards, which at the time Gov. Pawlenty supported. Always look for high quality renewable energy suppliers like GreenerEnergyGroup and contact them on this site.

Stymied by efforts to move the “feed in tariff” idea I joined forces with Rep. Jeremy Kalan (now CEO of his own energy company) to first pass legislation to help companies to reduce energy consumption and save money. Remembering the words of Willy Vogt (the German Legislator who introduced the legislation in Germany) “The least expensive power plant is the one you never have to build.” Willy came to Northfield (with the help of Yogi Reppman) to speak at a conference I organized with John Farrell of the Institute for Local Self-Reliance (here)

In 2010, Rep. Kalan and I also worked on legislation called PACE, which allowed home owners to defer the cost of solar panel installation on to their municipal utility payment much the way city infrastructure costs can be deferred. Although this policy was enacted it became difficult to implement but it provoked a fair amount of interest among Northfield renewable energy enthusiast.

When I was out of office from 2011 and 2012 the growing solar energy industry in Minnesota (MnSEIA) began to reorganize and put forward a policy first explored in Colorado, called Solar Gardens. When I was reelected in 2012, I began researching this idea and was about to put forward such a bill in 2013 when I discovered that (MnSEIA had brought their bill to Rep. Will Morgan. The Morgan bill did have a piece like the “Feed-in-tariff” idea but not as disruptive to the industry. It had something perhaps even more innovative than my bill and that was a calculation for the price of solar energy, which included the social and environmental costs of using fossil fuels as opposed to solar energy.

Not wanting to compete with Rep. Morgan I did not introduce a Solar Garden bill but instead re-introduced my “feed-in-tariff” bill to give more space for this new idea. I did not expect my bill to get a hearing as now all the attention was on “Solar Gardens” as it should have been.

I am happy to report and not surprised that Northfield is one of the first communities to get behind the development of a solar garden right here in Northfield. I recently attended a signing of the contract for the Solar Garden, which will be constructed on Craig and Dorothea Holden’s Eastgate Farm near Northfield. Pictured below are some of the people who made it happen. 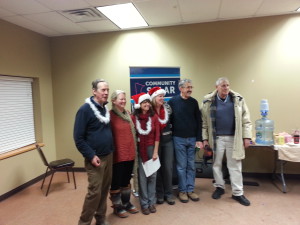 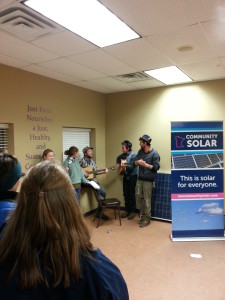 If you want to join the solar garden movement and generate solar energy in the Northfield area as you use electricity even if you are a renter or someone unable or disinterested in putting solar on your establishment? This opportunity is made possible by Community Solar Gardens and the efforts of Northfield Area Community Solar (NACS, organized after the Northfield Climate Change Summitt) It’s a great way to reduce carbon emissions. Subscribe to “leaves” this year and keep the coal out of your stocking.

There are many ways to learn more. Come December 28 at 7 p.m. to the Just Food Co-op community room, 515 Water St. for a “Turkey Talk” informational meeting. (With another one there Ja 12 at 7 p.m. and one Ja. 26, 7:30 a.m. at the Tandem Bagels community room, 317 Division.) Learn more at NACS’s developer’s, Minnesota Community Solar’s, website. Ask questions via the Northfield Area Community Solar e-mail address at nacsolargarden@gmail.com  (and like the community group on Facebook).

You just need to live or have a business in Rice or one of its adjacent counties with an Xcel meter. You subscribe to 25 years of electricity at a set rate at as small an amount as a leaf (half of a solar panel) or up to 120% of your average yearly electrical usage.

Installing solar panels on the roof and using a good quiet portable generator can not only help reduce your electricity bill but it can also help you conserve and use green energy which can be extremely beneficial for the environment. If you’re thinking of making the switch, you can contact professional roofers to help you out with installing.

In a recent Star Trib article,  “Xcel says that the sudden application for solar gardens has been surprising them. They expect these to generate the equivalent of a midsize power plant by 2015.” Northfield’s will be one of the first. You can subscribe and make truly clean energy so Xcel won’t need to replace all of its aging coal-fired plants nearing their last years of service.

The choice can now be yours with future generations’ and not just stockholders’ interests in mind. Communities will be generating solar electricity in “gardens” throughout the state.